Yes, the 3 Nations Biergarten Grill is open during the same hours as our Taproom.  We have some great items such as street tacos, burger and hotdogs, chicken tenders, quesadillas, loaded nachos and much more.

Are Children Allowed at the Brewery?

We are a family-oriented brewery that welcomes well-behaved children and parents who recognize the importance of watching their children as part of their experience at the brewery.

Where is 3 Nations Located?

You can find us by putting 3 Nations Brewing in your phone or vehicle GPS.  We are located at I35 and Belt Line Road in Carrollton, TX, just north of 635 (LBJ) and I35N.  Look for the giant grain silo and our historic grain-shed-brewery is next door.  We are located right behind Cane Rosso with a large sign on our roof.  You can’t miss us!

Where Do I Park in Downtown Carrollton? 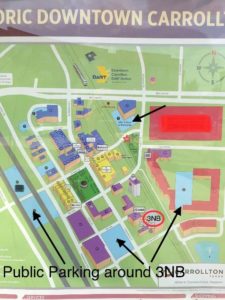 Downtown Carrollton has a lot of parking space in and around the Square to use.  Street parking, the free lot across from Cane Rosso, the covered lot behind El Rincon with over 150 spaces, just to name a few spots. Plus you may also use the first or second floor of any of the apartment parking garages in the area as well.

How did 3 Nations Brewing get its Name?

While training to be a Brew Master, our Founder, Gavin Secchi, came to appreciate the brewing traditions of three European countries:  Germany, England and Belgium.  Since that time, he wanted to start a brewing company named 3 Nations. Today, we take the best of those European beer styles and add American innovation with hops and spices to make a uniquely American craft beer.

How does the Background of the Founder and Brewmaster Make 3 Nations Unique?

Gavin wanted to learn to brew beer since he was a teenager.  He attended Siebel School of Technology which took him to Europe for training.  Gavin worked as a brewery at Goose Island in Chicago, Karbach in Houston, Two Rows and Franconia in Dallas and Rahr and Sons in Fort Worth.  He has had some great mentors and experience that prepared him to be a commercial brewer before starting 3 Nations.

Where did 3 Nations Begin Operations?

3 Nations began in an old unairconditioned warehouse in Farmers Branch, the original home of Grapevine Craft Brewery.  For two years 3 Nations was only a production facility with no taproom, until the city of Farmer’s Branch modified some zoning allow us to serve beer.  Brewing space by day, taproom by night we shared the same space until we moved to our current location in Downtown Carrollton.  Our original bar on wells where our first 3 Nations pints were served in our taproom is still used at our current facility.

What was 3 Nations Brewery’s first beer?

GPA (German Pale Ale) and American Wit (Belgium wit and forerunner of Royal Blood) were the first two beers.  3 Nations did not brew another beer until the beginning of year 2 – Bull’s Brown Ale which was a delicious English brown ale.  With the market changing rapidly, 3 Nations began their seasonal and specialty beer programs to put more beers into the market as craft customers were demanding new and interesting beers.

How Big is the Current Facility in Downtown Carrollton?

The square footage of our current building is 18,000 square feet with a large outdoor patio space making it one of the most unique and larger breweries in the state of Texas.  The current brewery has rooms designed for private-events, semi-private events and multiple spaces for people, kids and dogs.  There is a covered awning outside and plenty of space for patrons to enjoy the sun.  Inside, we have two taprooms that are climate controlled and two large areas cooled with large ceiling fans.

What is the History of the Shed Where 3 Nations is Located?

Built in 1950 by the Blanton family when they owned the silo, it was closed several years after the death of Bill Blanton in 1971.  The silo had been in operation for over 50 years at the time and the shed served as one of the largest grain sheds in Texas.  For the next 50 years the Shed was used to house an electrical company and served as a large storage facility, but mainly sat empty and unused.

Sandy Lake Park was a vibrant and historical park (swimming, picnic, rides, events) just west of I35 near Downtown Carrollton.  Operated by the Frank Rush family, Sandy Lake was the center of life and fun for many local and regional residents for 48.  3 Nations was notified that the Rush family had closed operations in the fall of 2018 and had merchandise for sale.  We purchased the picnic tables and other merchandise from Sandy Lake that we thought would fit our operation.  We also negotiated for what we considered some historical items that we could bring to the brewery and allow memories from the community and Sandy Lake Park continue.

In the dead of night in October 2019, the canopy over the carousel was welded in half and transported to the brewery location in Downtown Carrollton.  ABC local affiliate, Channel 8, covered the historic move.  Today it stands just outside the north entrance and shades our customers.  Other items of note we were able to borrow, confiscate or purchase: